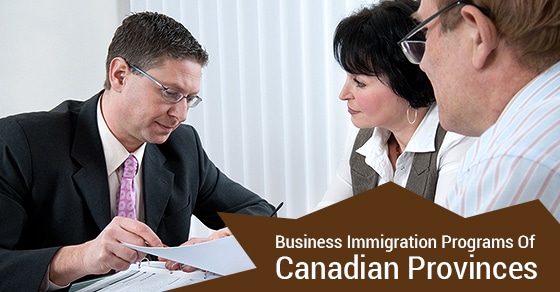 Six of the 10 provinces have Provincial Nominee Programs (PNPs) that allow them to recommend candidates for citizenship based on their economic needs.

Although provincial governments cannot make the final decision for citizenship, the federal government often accepts these nominations and uses discretionary powers to grant citizenship to applicants.

This makes the PNPs a fast-track to citizenship for certain people. Highly skilled workers, especially medical professionals, are often nominated. So are investors and businesspeople. In this article, we’re focusing on the latter. What does a businessperson need to become nominated? Well, that depends on the province.

Ontario is the most expensive and difficult province in which to be nominated.

Nominees in Ontario must be involved in a business investment of at least $3,000,000 CAN. As many as 25 investors can apply for nomination under the same investment. The business must be predicted to create as many full time jobs as there are investors, plus 4.

For example, a partnership of 5 people, each investing $600,000, could apply for a nomination. However, they would have to show that their business would create 9 full time jobs.

An investor applying individually must control at least 33.34% of a business in order to be considered.

British Columbia requires much less than Ontario. To be nominated in BC, an investor needs a $200,000 stake in a proposed business, and at least $400,000 total worldwide net worth. For businesses in the Vancouver area, these requirements are doubled to $400,000 and $800,000.

BC also offers a track for businesspeople who represent multinational ventures, called the Strategic Projects Program. A venture can apply for its managers to become citizens, provided they are planning to invest at least $500,000.

Manitoba and Saskatchewan’s requirements are similar to Ontario’s, except that the total investment for a nomination group only needs to exceed $1,000,000. Small businesspeople can also apply as individuals with an investment of $150,000, so long as they own at least 33.34% of the proposed business.

Investors must apply as individuals with a stake of $150,000. In addition, they must have visited the province to assess their business location for a minimum of 5 days.

PEI nominates investors who apply as individuals. Each individual must have a global networth of $600,000 or more, be planning a business investment of at least $150,000, and visit the province in person to present a business plan.