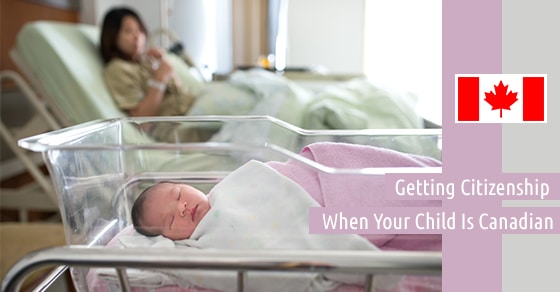 Jus soli is Latin for “right of the soil,” and implies that citizenship or nationality is granted to anyone born within the territory or state that enforces these laws. This means that if you are born in Canada, you are considered a Canadian citizen. Even the children of foreign nationals automatically become Canadians if they are born in Canada.

Nonetheless, if you have a child born in Canada that does not impart citizenship upon the parent. There is a chance that your child and you will not be allowed to stay in Canada. This is due to the widespread act defined as birth tourism where people who are not Canadian have children in Canada to give them citizenship and a chance at a better life.

The Canadian Government is trying to discourage birth tourism, but that doesn’t mean there aren’t legal ways for you to become a citizen. You will first have to obtain permanent residence, then when you qualify you can apply to be naturalized as a citizen.

However, having a Canadian child will not give you any special advantage to obtain permanent residence in Canada. The presence of children is of little relevance to most types of permanent residence applications, which focus on having work skills and education, or otherwise on the ability to become economically established in Canada.

In fact, most birth tourists or other foreigners who happen to have a child in Canada will have to return to their home countries together with the child. Once the child is old enough, he or she can return to Canada on their own and begin their life in Canada, since they will have the right to remain in, study in, and work in Canada. However, the Canadian child may never be able to bestow the right to live in Canada upon their birth parents, since even the parental sponsorship category is becoming increasingly restricted. For those who engage in birth tourism this is not their major concern, but for those who otherwise find themselves pregnant in Canada and are wondering whether to give birth here, these are important considerations.

Can You Get Citizenship Through a Canadian Family Member?