Immigration Minister Chris Alexander has released a plan for 2014 immigration levels that will see the admission of between 240,000 and 265,000 new permanent residents to Canada. Of these 63% will be economic immigrants such as Skilled Workers, Canadian Experience Class, and Provincial Nominees. Another 26 percent will be family class applicants such as children, spouses, partners, and parents. The remaining roughly 11% will be humanitarian classes such as refugees.

The Immigration Minister focused on the rise of two relatively new immigration programs: the Canadian Experience Class and the Provincial Nominee Program. With regard to the Canadian Experience Class, the program is expected to welcome up to 15,000 new permanent residents in 2014. These are people who have worked in a skilled occupation for at least one year in Canada while holding valid foreign worker status. This is a major expansion of the program from previous years.

With regard to Provincial Nominee Programs, the Immigration Minister plans to admit between 44,500 and 47,000 new permanent residents in this category in 2014. All the provinces, with the exception of Nunavut and Quebec, have their own Nominee Programs that allow them to choose a certain number of new immigrants per year, based on their province-specific requirements. Quebec separately runs its own immigration program. The Minister credits the rise and expansion of the various Provincial Nominee Programs with achieving a greater distribution of new immigrants across the country, rather than centralizing the migration of immigrants to major city centres. 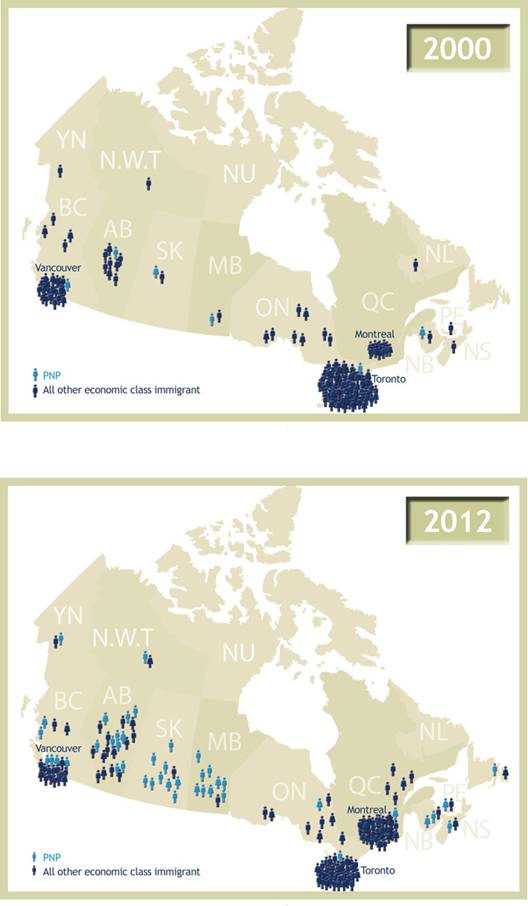 The Minister also remarked on his intention to develop a new Expression of Interest (EOI) skilled worker system by 2015. Under the Expression of Interest system, those skilled workers interested in immigrating to Canada would place a preliminary application into a pool of prospective immigrants, where they can be chosen by employers who would like to support their immigration to Canada. If they are chosen by an employer, the prospective immigrant can then make a formal application for permanent residence to the immigration authorities. The benefit of this program would be to reduce backlogs by only processing those skilled worker applicants who are immediately needed in the Canadian workforce. The EOI system is expected to be launched in January 2015. For the time being, Skilled Worker applicants will continue to be processed in the regular way while the immigration authorities work to reduce the years-long backlog.

What are the Different Types of Work Permits in Canada?

Citizenship backlog to be reduced by closing dormant files