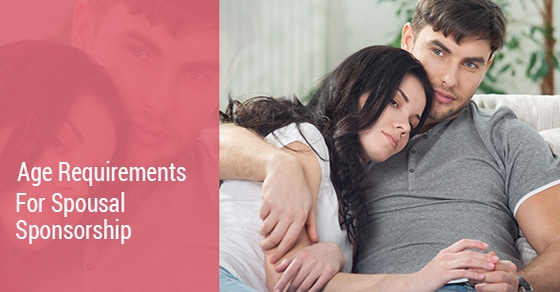 To sponsor anyone in Canada, the sponsor must be 18 years of age or older.

This is a federal requirement that applies everywhere in Canada, both for sponsoring children and for sponsoring spouses. The provinces also have strict conditions on the minimum age of the sponsored spouse.

You may also be unable to sponsor a spouse if you were recently sponsored by a different spouse.

If you are legally married in your home country, your spouse must be 16 years or older to receive your sponsorship. If you plan instead to get married in Canada, the situation is more complicated.

Provinces manage issues related to marriage. If you are not legally married to your spouse, and plan to marry in Canada, both you and your spouse must meet provincial minimum ages, or provide proof of parental consent.

In Ontario, a person cannot consent to marriage until he or she is 18. In British Columbia, Newfoundland, and Nova Scotia, the minimum age without parental consent is 19. In Alberta, Manitoba, New Brunswick, Prince-Edward Island, Quebec, and Saskatchewan, the minimum age is 18.

It should also be mentioned that sexual consent laws govern minimum ages.

Persons under the age of 16 are considered minors in sexual assault laws. A person more than five years older than a minor cannot have sex with him or her, legally, without a pre-existing marriage.

For persons under the age of 14, all sexual contact with an adult is illegal.

Divorce can make it more difficult to sponsor a new spouse.

Since 2012, the government has restricted the ability to sponsor a new spouse after divorce. If you arrived in Canada using a spousal sponsorship, but have since separated from your spouse, you cannot sponsor a new spouse’s application until at least five years after your arrival date.

You can also sponsor a person as a common-law or conjugal partner, as long as they are age 16 or over.

For example, a long-term same sex partner from a country that does not recognize same-sex unions could be considered a conjugal partner. In most cases, common-law or conjugal partners can be sponsored similarly to spouses.

What is the Provincial Nominee Program (Ontario PNP)?

What’s the Difference Between a PR Card and a Visa?