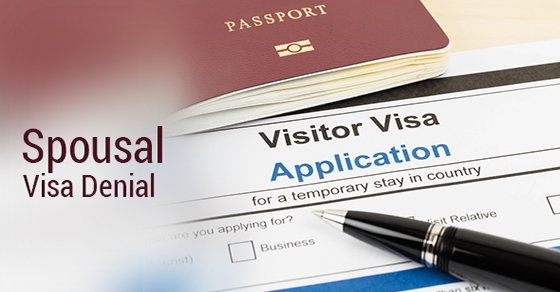 When your spouse lives in a different country, one of the most exciting points of your relationship can be their first visit to Canada. Unfortunately, not all of those visits go according to plan, and your spouse’s visiting visa (or “temporary resident visa”) may be refused.

In fact, it is common for the immigration authorities to deny a visitor visa to the spouse of a Canadian citizen or permanent resident. The reason for this is that the immigration authorities do not consider spouses to be genuine visitors, rather they see them as people who are likely to want to remain in Canada permanently. Since remaining permanently is inconsistent with being a true visitor, who would be expected to leave Canada after a short time, they visa will be denied. It can be very difficult to persuade the immigration authorities that the foreign spouse will leave Canada at the end of their visit, but if you want to try then proof of a home and a job to return to in the foreign country might be persuasive.

If your spouse’s visiting visa or sponsorship is refused, you can try re-applying with additional evidence, but it might be hopeless. Instead of wasting time, it may be preferable simply to sponsor your foreign spouse for permanent residence directly.

Re-applying will have the best chance of success if your spouse has a significantly new situation or new information that was not included in his or her initial application. Look at his or her refusal letter to find out the specific reasons the application was denied. That will be a good starting point for figuring out how to strengthen the new application.

The best preventative tactic against immigration application refusals is prevention. Always ensure that your sponsorship application is correctly filled out and well-documented before you submit it.

Consulting with an immigration lawyer is one of the strongest ways to make sure your case is in good standing. Doing so could save yourself a lot of money and stress down the road from an application refusal that could have been easily avoided.

What are the Required Canadian Immigration Application Documents?

What is the Difference Between Being a Canadian Citizen and Landed Immigrant?

How Can I Sponsor my Spouse to Canada?