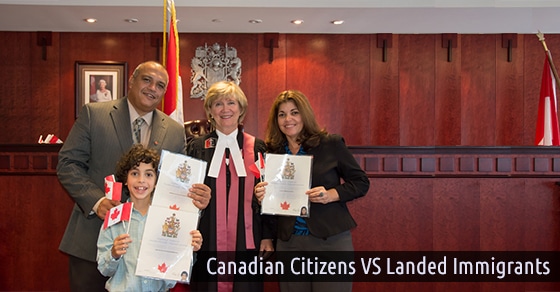 A Canadian citizen is one who was born within the country’s borders or has received citizenship through naturalization.  To become naturalized, permanent residents who qualify must first make an application to Citizenship and Immigration Canada to receive their certificate of citizenship.

In addition, if a parent was not born in Canada, but did become naturalized before a child’s birth, then citizenship can be granted to a child born outside Canada.

Minors can also receive citizenship by being naturalized by a parent through the application process.

To receive landed immigrant status, you must qualify for then make an application under one of the existing immigration categories.  You then enter the country through one a port of entry and are “landed” as an immigrant. The IMM 1000 form is used to create a record of your status. This is also known as a Confirmation of Permanent Residence or Record of Landing.

The landed immigrant status helps distinguish between the different classifications within the country. This includes non-permanent residents such as students and family members, as well as those who are citizens by birth.

An individual who has had permanent residency for a number of years can also be granted citizenship after making an application to the immigration authorities.

Knowing the difference between being a Canadian citizen and a landed immigrant can help you understand your rights. If you are applying for citizenship, you need to know the circumstances under which you can receive it to ensure a quick process without any delay.

Do You Need an Immigration Lawyer for an Appeal?

Where do Most of Canada’s Immigrants Come From?

Are There Financial Requirements to Sponsor your Spouse?